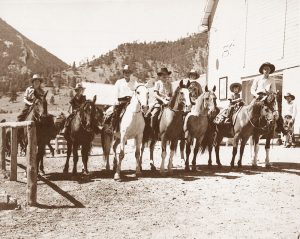 The oldest dude ranch in America began way back in 1879 when three brothers, Howard, Willis, and Alden Eaton established their horse and cattle ranch near Medora, North Dakota. Their friends from the East began to visit them almost immediately. Some of these early guests stayed for months at a time. Finally, one of the guests recognized the expense these extended visits entailed and prevailed upon the Eatons to charge for room and board, so “folks can stay as long as they like.” Thus, the family dude ranch business was born and an industry started. 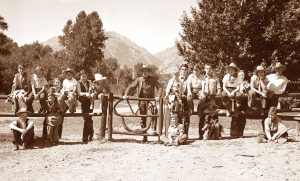 Valley Ranch was located 45 miles from Cody, Wyoming, and was opened in 1915 by Irving H. Larom and Winthrop H. Brooks (of Brooks Brothers fame). “Dudes,” a term for those visiting the West from the Eastern coast, traveled to Valley Ranch for an authentic American Old West experience. In 1922 Larom and his wife Irma started a successful college preparatory school at the ranch, known as the Valley Ranch School for Boys, The ranch offered lodging and authentic food along with providing trail rides, rodeo shoes, camping, and other typical Western activities. The recreation cabin offered dancing and a large stone fireplace for reading and writing by. The ranch also advertised new horses broken to ride will “[furnish] opportunity for some good pictures and considerable amusement.” Other activities included animal watching, fishing, gardening, target shooting, and card playing also provided. Also provided were summer pack trips off the ranch with guides and extended hunting trips.

Larry Larom of Valley Ranch was instrumental in starting the Dude Ranchers’ Association, becoming the first president in 1926. He served in that role for 19 years. 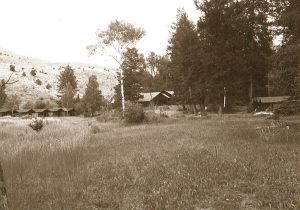 The OTO Homestead and Dude Ranch was the first dude ranch in the US state of Montana. It was started by James Norris (Dick) Randall and his wife Dora after they purchased squatters rights on a small cabin along Cedar Creek in the Absaroka Mountains. The original cabin had a dirt floor cabin with a sod roof. Randall courted wealthy eastern clients (the Dudes) and by 1912 they came to the OTO to experience a “genuine” western ranch lifestyle. The property grew to meet the needs of guests and by the 1920s included an impressive lodge (1921), cabins, barns, post office, and outbuildings. Notable guests included Theodore Roosevelt and Marcellus Hartley Dodge, Jr. 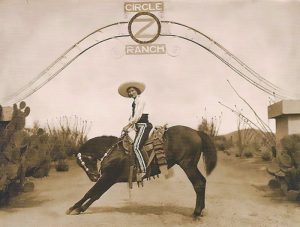 ​The Circle Z Ranch, which started as a sheep-herding operation in the 1880’s, was developed as a dude ranch in the 1920’s. It is the oldest continuously operating dude ranch in Arizona.

Topographical details often act as magnets that draw people and events to a specific location. If there is one such item in the area of the Circle Z, it is most certainly Sonoita Creek. This is one of the few streams in Arizona which flows through-out the entire year. In the southwest, water has always been one of the most prized resources.

Across the creek from the present ranch complex rises another landmark, Sanford Butte, known to ranch guests as Circle Z Mountain. Distinguishable from a fair distance in most directions, it serves as a guide for riders seeking the ranch huddled at its base. This butte has probably always served as a guiding sentinel since the days of the earliest Indians. High upon its southern flank is a small cave dating prior to any recorded history of the area. Ancient potshards and arrowheads have been found in the refuse on its floor. Evidence of prehistoric farming and pottery making settlements is found along the creek; the cave’s origin most likely spans to that prehistoric period. Today it is only inhabited by an occasional javelina or gila monster. A hike to the top of Circle Z Mountain will provide the climber with a panoramic view of the Santa Rita Mountains to the north, the Santa Cruz Valley to the west, the Patagonia Mountains to the east, and Mexico to the south. A register is on the very top of the mountain, where your climbing effort is not left unrecorded, as many before you have undoubtedly been. 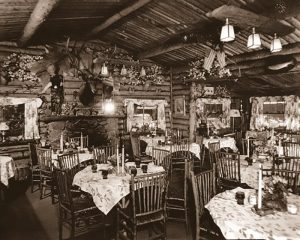 ​In 1912, the Buckhorn Lodge opened its doors to traveling guests for $5/day on the American Plan, which included food and lodging, as well as activities such as horseback riding, fishing, square dancing, singing, and cookouts. The ranch was run by Edgar M. Messiter along with James S. Ferguson and his wife, Florence (Brownie)—until James died, leaving Edgar and Brownie to marry and prosper.

In what may be considered the first form of social media, Edgar and Brownie hired a newly outed debutante as a social secretary, so that Edgar could focus on his gardens and outdoor ranch maintenance and Brownie could ensure clean accommodations and properly prepared meals. As a result of this debutante’s social campaigning, guests were only admitted with a letter of reference.

The early days at the Buckhorn Lodge offered a formal setting, with coffee served on the lawn before breakfast and afternoon teas. In between, polo was played on the lawn, and croquet courts were set up between the banks of the Colorado River and the guest’s tents.